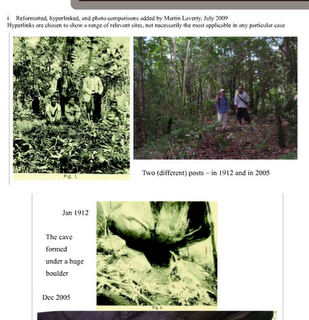 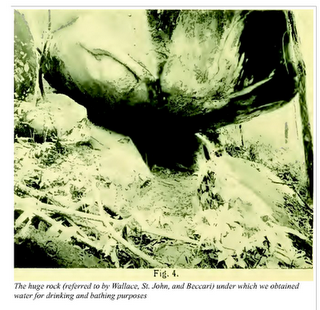 LANDSCAPE SETTING
GEOLOGY
The hill is a single mass of porphyry diorite rock, igneous in origin. It stands on the northern edge of a meandering valley of limestone karst, known as the “Bau limestone”. On the southern bank of this valley rises the Bungo range, composed primarily of sandstone. The boulders are part of the hills crust which have broken off and taken their rounded shape through weathering. Igneous rock weathers like egg-shells, peeling off layers over time, leaving rounded boulders. In the southern part of the hill, parts of the baserock are visible, yet to be broken off into loose boulders. These parts of the baserock are spectacular, some the size of a four storey shoplot. Exposed rockface is evident on the northeastern side, facing the two villages of Peninjau Lama and Peninjau Baru.

ECOLOGY
The hill was formerly covered entirely with mixed dipterocarp forest, with small patches of heath forest on the exposed rocky peaks. Over time, the vegetation has been altered to its present cover. The lower slopes have been altered by humans for a long time. Much of the timber used for building and other purposes have been extracted from these more gentle slopes. The forest today is very open, with the removal of almost all the large trees. Tapang Koompasia excelsa trees are not cut for wood, and form groves, especially on the lower parts of the ridges. Durian and langsat trees have also been planted, mostly on these lower slopes. The forest understorey is herbaceous, with a proliference of ferns, aroids and Amorphophallus.

The upper slopes are steep and littered with boulders. Arenga palms and bamboos are very common, the latter covering large areas which have been disturbed either by natural landslips or by clearings. While Tapangs still dominate as the tallest trees, the forest is more diverse with other large tree species.

The ridge top is broad along most of its north-south alignment, narrowing to craggy crests in some areas. The vegetation here has been altered drastically, with little of the original forest remaining. In the past, the ridge tops have been settled and farmed. These abandoned farms are colonized by a mixture of native secondary scrub vegetation (e.g. Dillenia, Melastoma) and exotics which have been either brought up for naturally wind dispersed (Bauhinia, Ixora, Garcinia, Nephelium). Elements of heath vegetation are visible (Nepenthes, Ixora, Calophyllum).


THE COTTAGE
The cottage is at 424m asl, built on a rectangular raised platform 16m by 8m. Four belian posts remain (4X4, possibly 5X5 originally, extensively weathered and burnt accidentally), forming a rectangle measuring 4m X 3m, the cottage was obviously larger than this, so these poles are likely to be either foundation pillars for the cottage or corner posts for a veranda. They stand about 1.5m, and have a rounded holder cut into the top. This indicates that a round railing was supported by these posts. It is unlikely that the floor of a cottage would consist of a round beam, so the likelihood that this was a railing is increased.

The remains of a path extending from the cottage northwards along the ridge are clear, with raised bunds on either side. The path is about 3m wide, and overgrown. The side bunds rise about 1-2m on either side. Close to the beginning of this path at the cottage, a small stake (2X2) was found in the ground, emerging about 30cm and also weathered. This appears to be some form of supporting peg for steps. The path extends for about 50-70m, to where the level part of the ridge drops.

It is possible that this raised bund-like structure may have been some form of defensive battlements in the past. This would be consistent with the comment from James Ritchie that there used to be a fort on this hill. Maybe the cottage and the fort are actually in the same place, one built over the remains of another? To investigate this further, the wider surroundings of the cottage site should be checked. If this is the site of a defended position, more battlements should be evident along the more level parts of the ridge, perhaps further away from the cottage site itself.

We also visited a large boulder overhang where Rajah Brooke used to bathe. Water can be collected here. The depression that formed a bathing pool has been filled up by earth.

About Alfred Russel Wallace, a contemporary and correspondent of Charles Darwin, who traveled widely across the Malay Archipelago between 1854 and 1862, collecting specimens and describing the natural world, and his unique association with Sarawak.

Alfred Russel Wallace (1823 - 1913) arrived in Singapore on 28 April 1854.  Over the next eight years, he traveled extensively in what is now Malaysia and Indonesia, identifying and collecting specimens.

Wallace's trip to the Malay Archipelago was made possible by a grant covering the expense of his passage to Singapore. He had letters of introduction prepared for him by representatives of the British and Dutch governments. The Rajah of Sarawak, Sir James Brooke, supported Wallace's visit to Kuching and the surrounding areas from 1 November 1854 to 23 January 1856.

In March 1855, Wallace decided to travel from Kuching to Simunjan in the hope of collecting orang utans (mias) which were reported to inhabit the area. In eight months, he collected 15 orang utans. He attempted to raise an infant orang utan, whose mother he had shot. Wallace expressed great sorrow when this orang utan died despite his best efforts at being a foster parent.

Wallace returned to Sarawak in November 1855, this time traveling on foot up the headwaters of the Sadong and Sarawak Rivers. Reactions of people to Wallace ranged from extreme fright to extreme curiosity, and he was often the centre of attention of the entire longhouse.

Wallace spent much of his remaining time in Sarawak at Sir James Brooke's bungalow near the summit of Bukit Serambu, Siniawan. In his book “The Malay Archipelago” he writes, “I have been staying some time at a cottage of Sir James Brooke's, about twenty miles inland, on the ridge of a mountain, at an elevation of about one thousand feet. The path up is peculiar, half is over broken rocks, the other half up ladders.” And further on, he notes, “Huge boulders, as big as the houses themselves, rise among them, and hang over them in the most extraordinary manner. Every one is a picturesque object stained with lichens, and on the shady side covered with mosses, while the tops are generally more are less clothed with curious ferns and orchids.”

Wallace's legacy is not only the journeys, but the theories he developed from his observations. Prior to his travels through the Malay Archipelago, Wallace had begun to think about ways to prove that living creatures are constantly changing. He continued to explore this in the paper he wrote while in Sarawak titled “On the Law Which Has Regulated the Introduction of New Species” published in September 1855 (commonly known as “Sarawak Law 1855”). It was this essay that spurred Darwin to write “Origin of Species”. Wallace and Darwin are recognized today as co-developers of the theory of natural selection.

150 years later, at the “International conference on biogeography and biodiversity: Wallace in Sarawak - 150 years later” held from 13-15 July 2005, the Sarawak Chief Minister Tan Sri Abdul Taib Mahmud Abdul Taib suggested that the sites Wallace had worked on in Sarawak, like the "Wallace Point" at Santubong, be preserved as historical, educational and scientific heritage as Wallace had brought the state to the height of international acclaim through his writings and collections. http://wallacefund.info/

"The old government bungalow on the hill overlooking the mouth of Santubong River, the exact spot where Wallace wrote his Sarawak Law, can be renovated to provide a one-stop centre for the study of natural history for schools, universities and researchers," he said. He also suggested that the Universiti Malaysia Sarawak (UNIMAS) could take the initiative to set up a Wallace centre at Santubong, with the government's support, to inspire young scientists and promote academic discourses on issues relevant to the state.

“If this is not done, future ages will certainly look back upon us as a people so immersed in the pursuit of wealth as to be blind to higher considerations. They will charge us with having culpably allowed the destruction of some of those records of Creation which we had it in our power to preserve; and while professing to regard every living thing as the direct handiwork and best evidence of a Creator, yet, with a strange inconsistency, seeing many of them perish irrecoverably from the face of the earth, uncared for and unknown.”