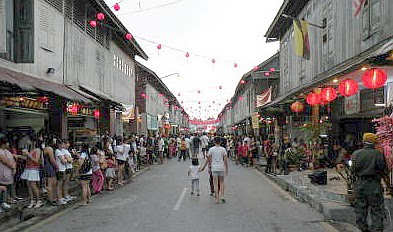 BAU: The old Siniawan town, which still retains its vintage wooden shophouse building, will be the next big tourist destination in the state.

Towards this goal, Deputy Tourism Minister Datuk Dr James Dawos Mamit is determined to make sure the old town gets its heritage status soon, by which plans are underway to include Siniawan in a special tourism package.

“This soon-to-be heritage site will be included in the Wallace Trail tour package,” Dawos said after a grand Chap Goh Meh parade held at the old town on Monday evening.

He believed that it would be a pity to ruin the beautiful old shophouse by replacing them with new ones as the Siniawan old town had been one of the very few places in the state that had retained the old wooden building architecture since the 18th century.

Vintage beauty: Local visitors mostly from Kuching City flocking into Siniawan old town to witness its Chap Goh Meh parade.
“This is a heritage site but it has yet to be gazetted under the Sarawak Heritage Ordinance. It had been proposed and tabled recently. Now it is waiting for consideration.

“Once gazetted, nobody can renovate the front of the Siniawan old town. Even if they have to, the original structure must remain the same, or at least the front part,” said Dawos.

His idea would be for tourists to travel from Kuching in river taxis to the Siniawan jetty, go for sightseeing at the old town, before proceeding by land to the Wallace Trail at Gunung Peninjau, some 15 minutes drive away from here.

The Siniawan old town was set up by the Chinese from here in 1821 after they fled from Rajah Brooke’s raid. 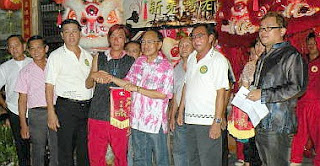 A token: Dawos (second right) presenting a pennant to a participant of the Chap Goh Meh parade at Siniawan old town.
“They (the Chinese) eventually settled here. If this place is gazetted, it would be a tourist attraction as it is one of the only few places in Sarawak which have maintained their old building structure and architecture up until today,” he said.

Currently, the Wallace Trail at Gunung Peninjau in Bau is being upgraded to be more hiker-friendly, while the Brooke’s Cottage on the top of the hill will be reconstructed according to its original design as what have been left there now are only a few stilt remnants of the old wooden cottage.

“My ministry had approved and allocated RM1mil for the Wallace Trail and Brooke’s Cottage projects as well as to set up a tourist information centre at Kampung Peninjau at the foot of the hill,” explained Dawos.

He said he had talked to villagers at Kampung Peninjau to set up homestays for tourists’ accommodations.

He had also discussed with owners of the two old shophouses at the Siniawan old town to have the interior of their premises renovated to become accommodations like those of a hostel or an inn.

“Let us face the fact that foreign tourists spent about RM56.5bil in the country in 2010. In 2011, they spent more than RM57bil. It will keep on increasing each year.

“We need to take this opportunity. We need to tap this income into Sarawak tourism and help the rural areas.

“We want to promote this to tourists. When the tourists come, then more income will be coming in and thus, it will improve the livelihood of people here,” said Dawos.
Posted by Hamidah Abuseman at 11:00