THE KELABIT.....inhabitants of a remote plateau in the Sarawak Highlands 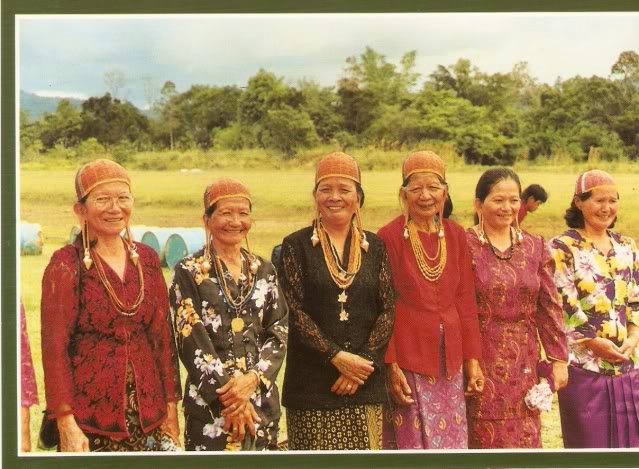 The Kelabits of Sarawak First "discovered" around the turn of the 20th Century, the Kelabits, a tribe of fierce warriors and headhunters who saw off anyone entering their territory, were generally given a wide berth by neighbouring tribes. Their origins are not known. Culturally and linguistically, they are distinct in many ways from the other thirty or so tribes in Sarawak.Under broad conical hats, they wore their hair long at the back or done up in a bun held in place by pins of metal or horn. Around the waist hung a long sword-parang with a curved staghorn hilt and wooden scabbard. The men had two holes on each ear, pierced during infancy. The bottom hole was adorned with heavy brass ear rings which greatly extended the ear lobes so that they often hung down to the shoulders. In the upper hole, kept open by wooden plugs, the warriors wore leopard's fangs. 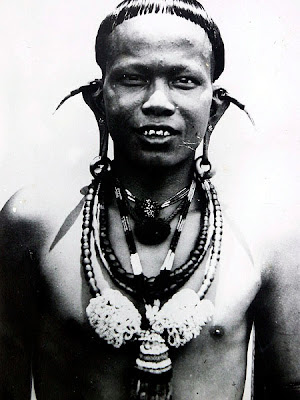 the Kelabits, a tribe of fierce warriors and headhunters who saw off anyone entering their territory 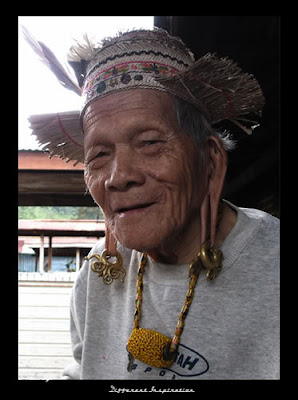 The women had elaborate tattoos, a fine lacework of dots and lines, on almost the entire lower limb, from the foot to well up the thigh, so finely decorated that from a distance, it looked as though they were wearing blue-black stockings. They also wore brightly coloured skull caps, and their eyebrows were plucked for the sake of beauty. 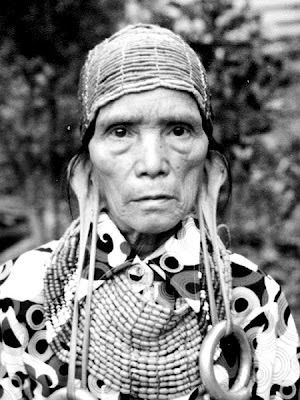 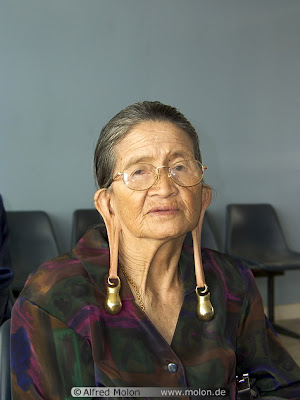 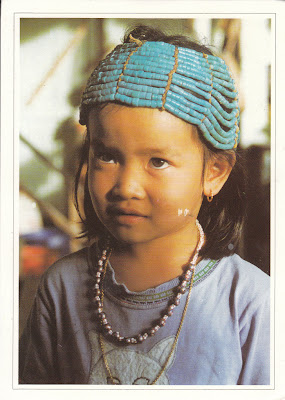 Their homeland, now called the Kelabit Highlands, is pretty much a large plateau ringed by a series of jungle-covered mountain peaks.Lying at an altitude of between 3400 to 6000 feet above sea level in the north-eastern corner of Sarawak, their territory extends to the Sarawak edge of a central mountain spur that divides Borneo along the middle. On the other side of this spur lies the Indonesian state of Kalimantan, formerly part of Dutch Borneo.One of the smallest tribes in Sarawak and, now, a branch of the Orang Ulu, the total Kelabit population of about 6000 people represents a mere 0.4% of Sarawak's population of 1.5 million, just 0.027% of Malaysia's 22 million. Less than a third of them live in the highlands. The rest have moved away to the towns, for further education, to find jobs, and so on. 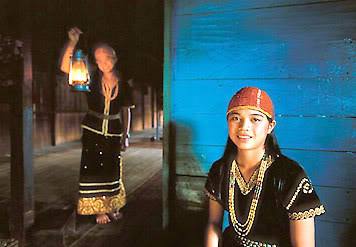 In the tribal heartlands, most Kelabits live in longhouses. Bario Asal, the original longhouse (until 1963, the only longhouse) at what is now called Bario, extends in territory from the Tama Abu range to the Dabpur River. The plains it is located upon, and the longhouse itself, was known to the Kelabits as Lemba'a (literally wet place). Members of Z Special Force made a parachute drop into this area in 1945 and set up their HQ there. Defining this operational area as "The Plains of Bah", they waged a guerrilla campaign against Japanese forces with the help of Kelabit warriors.

When the war was over, the Kelabits finally entered the mainstream of 20th Century life. In recognition of wartime service, many warriors from this longhouse were awarded medals and decorations. And the airstrip built to service the war effort became, and still remains, the only gateway into Kelabit territory.

Shortly after the war, groups of missionaries arrived, chastised the Kelabits roundly for their pagan ways of life, destroyed many cultural artifacts and converted them into Christianity, almost en masse! Around that time, too, came the first schools. Sarawak was then a British Colony. In 1963, Sarawak joined Malaya as another state in the newly-formed Federation of Malaysia. Indonesia laid territorial claims to Sarawak and began what is now known as the Confrontation, with Indonesian soldiers entering Sarawak and attacking tribal people living along the border areas.Since Bario had the largest area of flat land on which to build an airstrip, it became the operational centre for British forces stationed to defend other Kelabit longhouses deep in the interior.

However, many of these were too close to the Indonesian border and too dispersed to be properly defended. People from the border areas were, thus, re-settled on the Bario plains, to protect them from Indonesian attack. Land was donated to them by the people of Lemba'a, not only for building new longhouses but also for raising padi.

These migrations, staggered over a period of time, were quite complex. The original longhouse people renamed their home Bario Asal to differentiate it from those of the newcomers.

Upper and Pa' Ramapuh Lower - these two longhouses, side by side astride a small stream to the front of the Junior School, were built by people from now-extinct longhouses at Pa' Main and the original Pa' Umor.

The following longhouses are currently also located on the Bario plains:

Arur Dalan - located beyond Bario Asal at the foothills of the Tama Abu range, its people originating from the now extinct Kuba'an and Pa' Tik longhouses. (Note: The latter has been revived by nomadic Penans in comparatively recent times.)

Pa' Umor - located on the east bank of the Dabpur River, inhabited by Kelabits from a longhouse of the same name once located on the hills adjoining Kalimantan. Arur Layun - a small seven-door longhouse, lying across the road from Bario Asal just behind the church, built by people moving in from Pa' Bangar and Pa' Lungan.

Pa' Derung - about an hour away on foot from Bario proper, now home to people who came from Kuba'an and, in more recent time, from Long Lellang. Several new longhouses have come up since the upheavals of 1963 and 1964:Pasir Puteh - once listed as two separate entities, namely, Padang Pasir (around the old runway) and Kampung Baru (about half an hour away from the runway). Not really a longhouse, except as an administrative entity, it is an assortment of single houses built around the old airstrip and several government buildings. The area was developed fairly recently, around and after 1990, mostly by displaced retired Border Scouts from various places, such as Pa' Ramudu, Pa' Dalih and Long Dano. 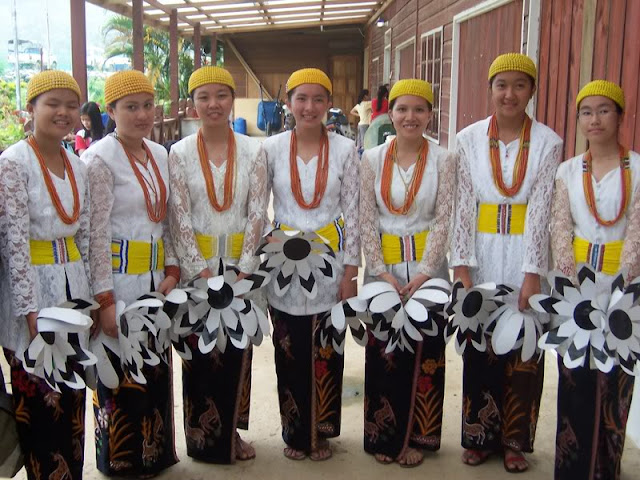 
Bario's one and only shopping mall is located there! Pa' Ukat - around an hour away from Bario, and built around 1970 by people moving in from Pa' Umor and Pa' Lungan. Farther afield from Bario lie several old Kelabit longhouses, ranging from six to ten hours away from Bario, these being the travelling times on foot through the jungle: Pa' Lungan - around three hours away.

Long Peluan - around ten hours from Pa' Ramudu and farther downhill. Close to it lies Long Banga, the home of the Sabans, an off-shoot of the Kelabit tribe. Even farther afield, not on the Kelabit Higlands but in the Baram lowlands, are three other Kelabit longhouses:

Long Lellang - about three days away, south west of Bario, Long Seridan - a long distance away to the north-west, and Long Napir - beyond Long Seridan, the farthest away from Bario 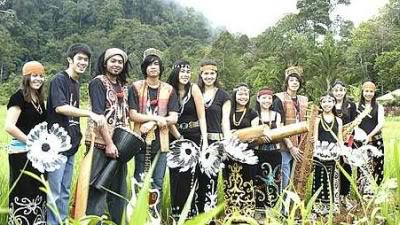 Posted by Hamidah Abuseman at 11:26