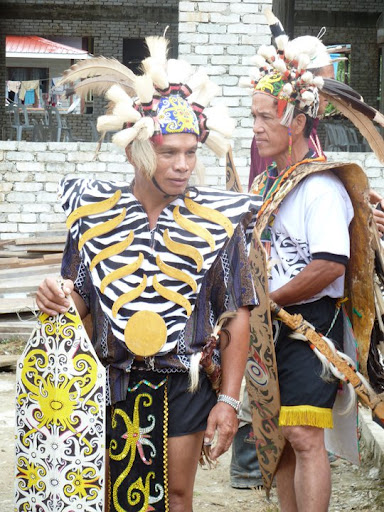 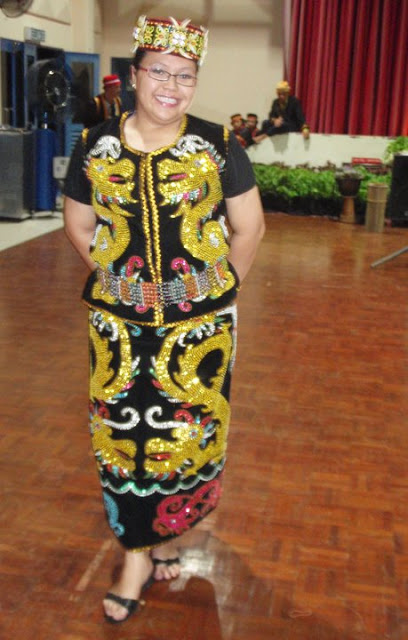 With the population about ~22,000, the Kenyah inhabit the Upper Belaga and upper Baram.

There is little historical evidence regarding the exact origin of the Kenyah tribe. Their heartland however, is Long San, along the Baram River and Belaga along Rajang River.

Their culture is very similar to that of the Kayan tribe with whom they live in close association.

The typical Kenyah village consists of only one longhouse. Most inhabitants are farmers, planting rice in burnt jungle clearings.

With the rapid economic development, especially in timber industry, many of them work in timber camps. 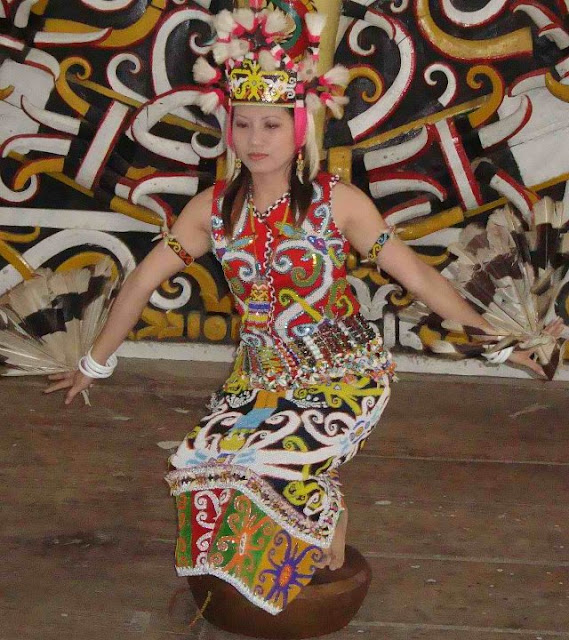 Source of the photos : Anak Borneo

When Kancet Papatay depicts masculinity and strength of Dayak Kenyah men, the Kancet Ledo otherwise depicts the beauty of a woman as a rice plant blown by the wind.

The dance is performed by a women wearing traditional clothing of Dayak Kenyah Tribe and her both hands holding the feather of Enggang bird.

Usually this dance is performed on top of a gong; therefore, it is also called Gong Dance. 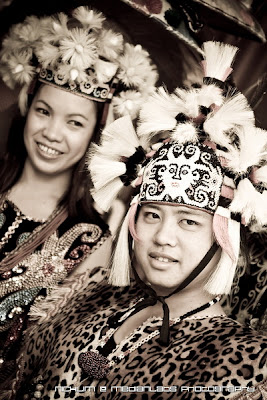 Kenyah is one of the ethnic group in Malaysia. The community of Kenyah has a unique wedding customs. In Kenyah traditional custom, the parents would start to think of the way to look for a spouse for their son or daughter when he or she is mature enough. However, if their son or daughter already has their chosen loved one, they can tell to their parents.

There are certain stages in Kenyah wedding customs :

1.  METIP (the groom’s family asking the bride’s family whether the bride is still available)

As the token of engagement, the woman will be given OF :

1.   Beads of bracelet call ‘beluko jangin’ which a form of small plate made of brass
2.   ‘Uleng’ which form a necklace made of beads
3.   Clothes
4.  ‘Taah’. ‘Taah’ is a kind of costume made from small beads and a few of goat-fur.

By the time for the tokens to be presented, they will discuss the time when they will held the wedding ceremony. The engagement ended with a dinner attended by both families.

At the day of the ceremony, the wedding will be held at the groom’s longhous. Then, it is the groom who fetches the bride from his designated ‘amin’. The opposite will happen if the wedding is held in bride’s longhouse. 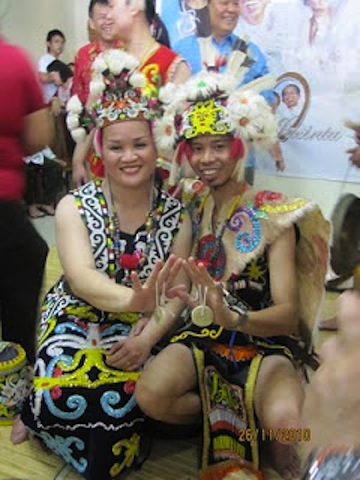 The ceremony will started with the couple seat on a ‘Tawek’, a kind of gong.

which means hopefully the couple will have sons and daughters, good harvests and then later on live happily ever after.

The ceremony will begin with the bride sit on the gong, without her groom. Eight womans will stand nearby with a ‘sa’ong’ each in their hands. These women will hold the ‘sa’ong’ suspended over the head of the bride. A moment later, the ‘sa’ong’ will be removed one after another. The sarongs were place on them, one after another. The sarongs were then given to eight women who are involved. 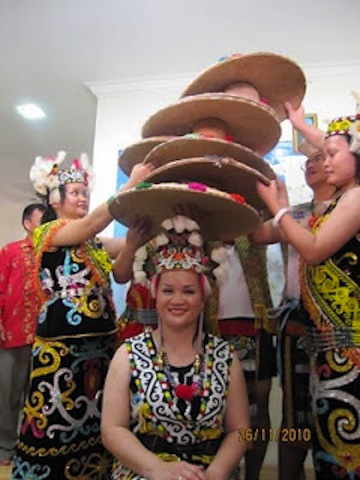 4.  BRIDE AND GROOM SITTING ON THE GONG TOGETHER

After the completion of the delivery of sarongs to eight women, then the groom later called to be sit on the gong together with the bride. This time, the couple were ask to press the palm of their hands onto a handle of ‘parang-ilang’ without pulling it from its sheath. The rest of men and women were also required to place their hands on the top of their couple hands.
  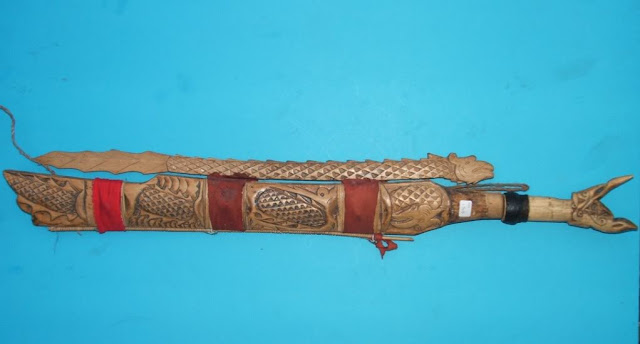 5.  FEEDING EACH OTHER WITH RICE AND FISH 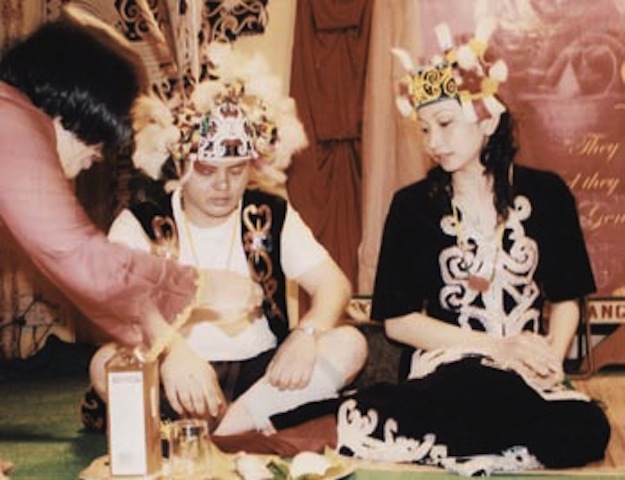 The couple would start to feed each other with rice and fish. 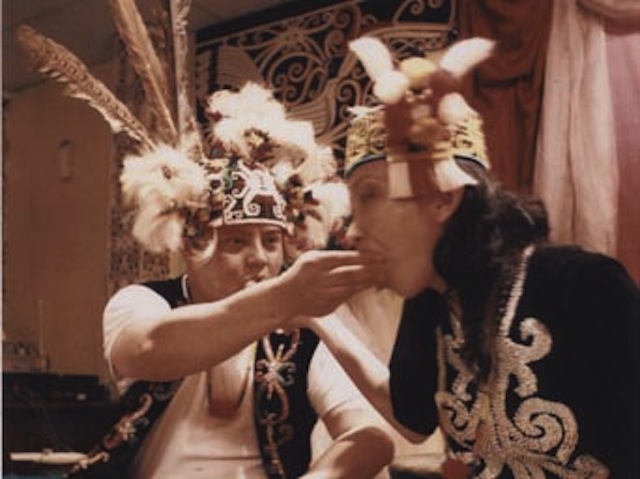 6.  ‘TAI NAO ABUT JAN’ (working at the foot of a ladder symbolic of two people going to work as husband and wife)

Towards the end of ceremony, the couple then have to go through one of the rite, called ‘tai nao’ abut jan’, which mean going work at the foot of ladder’ symbolic of two people going to work as husband and wife. The attendants, they will walk in a single line. In front of the line, there will be a man beat a small gong called ‘mebang’ as they walk. One of the attendants will carry a rattan basket on her or his back and filled it with eight piece of firewood.

Lastly, when the procession is over and there were no more firewood inside the rattan basket, the couple then will be taken to their seats. People who attend will sit with them. By this time, they will start to sing.

The sound of ‘sape’ filled the air and the ceremony will end with a dinner together with both sides of the families. 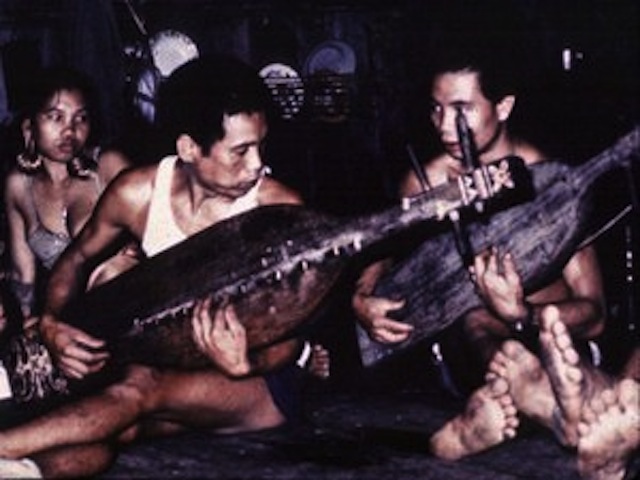 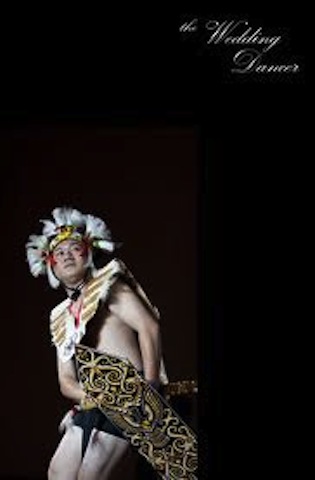 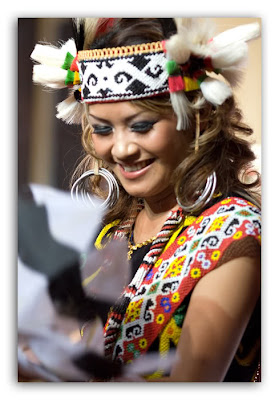 One of the wedding performer in full Kenyah attire 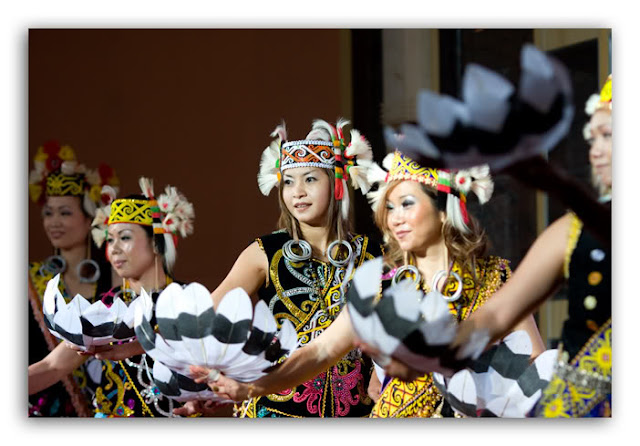