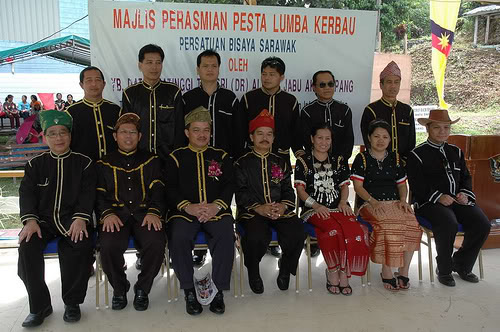 The legend tells of an immigrant family living in the North of the Borneo Island. In this family were seven children, 6 boys(Peti Barambai or Pati Barabai, si Garamba, Peti Garamba, Peti Runa or Pati  Begunak, Smaun or Si Maun and Alak Batata or Urak Betatar or Lok Batata or Awang Alah Bertabar)and a girl (Siti Duyah or Duri or Bunga Sunting). A boat race was used to determine who was to become the Rajah of Brunei.

This race  was won by Alak Betatar the youngest brother. He became the first Rajah of Brunei and later converted to Islam and became Sultan Mohammed, the first Sultan of Brunei.

Peti Barambai, the eldest brother, became the Raja of Java. Si Garampa settled  in the Limbang area an became the ancestor of the Bisayas. Peti Garamba  settled in the Tutong(Brunei),Peti Runa  in the Kinabatangan  River (Sabah) and Smaun in the Birau River(south of Tutong). Siti Duyah marr ied a Chinese named Awang Sunting (or Ong Sum Ping) and settled near Mount Kinabalu (Sabah). 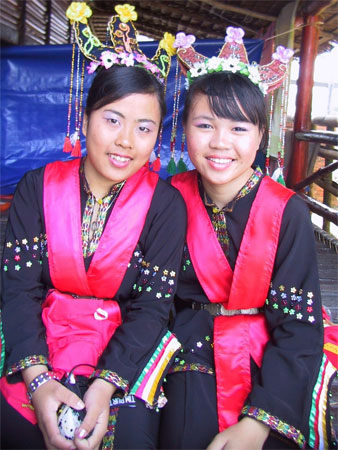 Several theories were put forward by several researchers regarding the origin of the words Bisaya.

Beyer  H.O. in 1926, Hester E.D. in 1954 and Harrison in 1956 suggested that the name may have come from the empire of Sri Vijaya (Sonza, 1972). However, in 1960, Eugene Vestraelen (a Professor  of Linguistics at the University of San Carlos, Cebu City) cautioned that linguistic derivation of VIJAYA would not be BISAYA but BIDAYA or BIRAYA.

In 1960, John Carol suggested that the name originated from  a culture hero named Sri Visaya.

Derek  Headly (1950) recorded that Bornean Bisaya legend  which says that the Sultan of Brunei, upon seeing the beautiful land  of Bisaya,  exclaimed Bisai-yah! meaning How beautiful!

These are all the theories and speculations and perhaps we will never know the origin of the name Bisaya.

Origin of the Bisaya People.

Sonza (1972) asked the question, " Did the Bisayas of the Philippines originate from the Borneo? So did anthropologists and historians for many years. So far no definite answer has been arrived at.

In 1970, there were more than 10 millions Bisayas estimated to live in the Philippines compared to about 14 thousand in Sabah and 3312 in Sarawak.

According to Sonza (1972)  at the time of the Spanish conquest of the Philippines (Magellan-Legaspi period), that is, from 1521 onwards, the Bisaya of Borneo were living in the province of Melano. He further suggested a possible affinity between the Bisayas and present day Melanao along the Sarawak coast from the mouth of the Rejang River to the North of the Baram.

Bewsher (1956) recorded that the Borneo Bisaya had moved from one place  to another within Borneo. The Limbang Bisaya migrations, were very recent subsequent to the Murut decline in that area. Both tribes were harried by the Bruneis from the coast and Kayan from the Baram.

At the same time, those Bisayas in the Upper Belait and Tutong Rivers fled to Labuan and Padas  rivers under pressure from the Baram headhunters.

After the secession to Sarawak in 1890,migration of Bisayas from Brunei to Limbang followed.

There is little trace of Islam amongst the Limbang Bisaya community, except for those who were converted, or by inter-marriage. They are either Christians or still practice animistic beliefs. (Asmah mentions hat all the Bisaya in Sabah, Sarawak and Brunei are Muslim.) Though they treasure their cultural tradition of medicine, marriages, death etc., they don't actually practice it now, possibly due to the influence of the religion. Even though they would call the traditional medicine men or women to perform rites in times of illness, many now would go to the clinics available around their places for treatment .

They do still believe in bad omens and spirits associated with the sounds of animals.

Limbang Bisayas are great music lovers: The gongs can be found in every house, (cf. Asmahs claim that the Bisaya are supposed to be the best gong musicians in Sarawak). It is as if somebody just beats the gong and everyone-men, women, young and old just starts to dance. Their musical instruments consists of gongs, drums, and violins of fine quality. The drums usually is made from a hollow log and covered from one end to another with the skin of monitor lizard (biawak). The drum is beaten with a wooden hammer. The drum is also mentioned by Asmah except  she does not mention the type of skin used. The other instruments that are found are sengkurong and kalid, besides several items  such as agong, kelentangan, tawak, bebandil,  and bandil teretek. 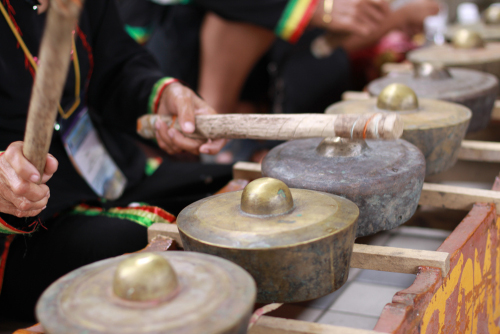 All these instruments are used in the gandang or bebulang ceremony, marriages, deaths, births, etc.

Besides the musical items, the Bisayas are able to make good parangs for various purposes. There are manao or menao which are used by the bride-groom, and madik which has are bronze handle and carried as a kind and as a kind of weapon by the youngsters.

There is another madik that  is longer in size and was used for ngayau in the old days;and the sandong used for self-protection. Beside the parang, Limbang Bisayas also make very good saging, a container used to carry rice for the bebulang ceremony.

The favorite costumes are made of balak material with gold-like buttons either in front or at the lower part of the sleeves.

The are very  decorative people in their display of courtesy especially to a guest. Most of the houses have a kind of tray , lengguai, for serving their guests and a separate lengguai for serving rokok daun to the guest during ceremonies.

Traditionally, the girls wore tenturok, a kind of chastity belts, as part of their dress.

The Sarawak Bisaya celebrate their Pesta Babulang in Limbang, northern part of Sarawak.

There will be showcase of Bisaya culture and heritage. There will be Culture dance ( like bamboo dance) and music (Bisaya are wellknown of their best music in Sarawak especially the Gong orchestra).

Not forgeting the buffalo race and Bisaya Beauty Pageant. The neighbour Bisaya from Brunei and Sabah do participant and share their culture with the Sarawak Bisaya. 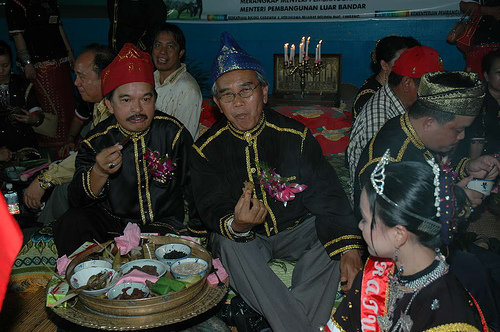 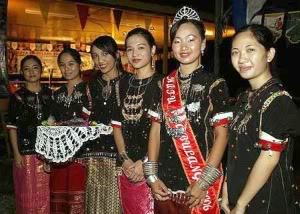 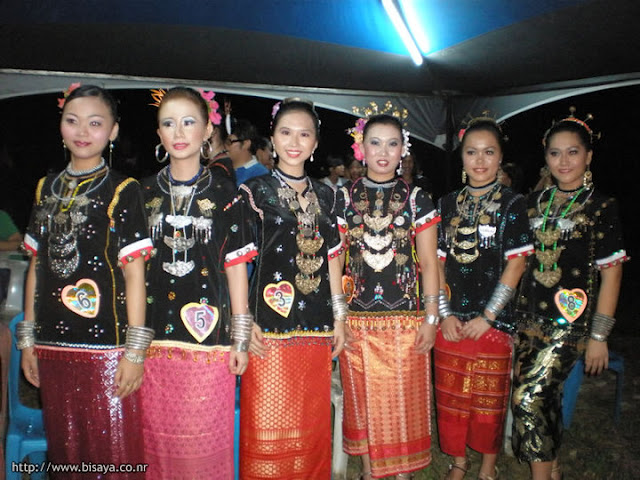 It is customary for a Bisaya if he well off in his years work to hold a yearly feast called bebulang. If he cannot afford to celebrate it once a year he will do it at least once in two years. For this feast he will kill from one to three water buffaloes so that his family may feed the guests.

Sometimes after the birth of the child it  is the custom  of the Bisaya parent to give the child a name after the fathers or mothers deceased grandfather, if the latters children have already died. if they are still alive that name cannot be given to the baby. Instead, he can be named wit h the name of his distant relatives. The reason for this is  that a Bisaya  is not allow  to mention the name of his or her father  or mother-in-law.

If a person is sick, belian ceremony is held in the sick persons house. Here the medicine men (dukun) officiates intoning his pelian chants to drive away the evil spirits which caused the sickness. In the belian chants, the dukun summons lematai abai and Gods of people of various races in the region,to come together with all their curing charms to cure the sick person.

The Bisayas are animists and believed in Allah Talla, a mighty spirit(Sandin,1972),and a number of heavenly hosts and spirit beings (Punchak,1989).They believed in the lamatai (spirits of the deceased )and lingu (spirit of the souls). Lamatai are dangerous and takes many forms including the sampar or ko awad atis (the long legged ghost), or pontianak (ghost of a women who died as a reason of child birth), and ogol (headless ghost). Anyone of these lamatai can caused a number of illnesses or even death although the lingu are not directly harmful(Peranio,1977).

However, one would invite sundry and accident mishaps upon one self as a consequence of mistreatment of plants and animals which caused discomfort and harm to their lingu. There are also naughty spirits (anak duato or fairies), generally harmless, preying on those with lambut lingu (lemah semangat in bahasa malaysia;literally,weak soul)and contribute to unexplainable malaise and discomfort.

(This article was contributed by Mr. Joseph Blandoi, an admin. officer of SALCRA, Kuching.  E-mail : jbland01@tm.net.my . It was extracted and summarised from Dr. Shafiq's article in Sarawak Museum Journal by Ms Joan Alicia Blandoi) - Webmaster

1.  Nulasoh (getting to know the bride)

If the son of the Bisaya has grown up to a marriageable age, his parent will look for a suitable girl for him to marry. Then the groom's family will send their relatives to see the woman and propose her. As normally in Malay Culture, the representations from both sides communicate with pantun. If the woman is willing to marry the man, her family will send some relatives to the groom's family, then they will proceed to the next step, Basuruh or Barian

A Basuruh is usually led by the groom's parents accompanied by some relatives. They will bring some gifts for the host. In the bride's house, the talk on the dower will begin after lunch (makan madau). Then the groom's family will hand over an engagement ring and some money to indicate that the engagement is settled. The economic background of the families plays a significant parts in the process.

Based on Bisaya tradition, the dower must consist of :

1.  Daily money (has kahwin) for a number of everyday necessities.
2.  A water buffalo (to be slaughtered for communal meals.
3.  Monet for the wedding reception (belanja hangs)
4.  Kumbang tandu (wedding token. i.e. a gong)
5.  Awedding gift (the value of the gifts depends on their agreement) for each representatives of the bride's family who accept his marriage offer. (the representative consist of four persons. Two from the father side and two from the mother side.

The Bisaya wedding will take place at the bride's place. The guests are received with Bisaya's traditional music. The groom's family will accompany him to the bride's house. He carries a sword (called bujak) as a self-protection and a basket (sarot) as a symbol of his new life with the bride. The handing over of dower as agreed will take place after lunch. Then the groom can get in the back room of the house. His relatives will leave midday or the next morning. He will stay for the bagu atis.

4.  Bagu atis (cleaning feet and praying for the good fortune)

Three days after the ngadapit mansion, will be done by cleaning both the bride and the groom's feet and praying to keep them away from the pogot ghost.

Two days after bagu atis ceremony, nguli angai will be hold. A ceremony to celebrate the coming of the groom and his wife to his house. The newly married couple will stay at the house for two to three days before moving to their own residence.

Posted by Hamidah Abuseman at 04:36