THE NOMADIC PENAN.....GUARDIAN OF THE FOREST 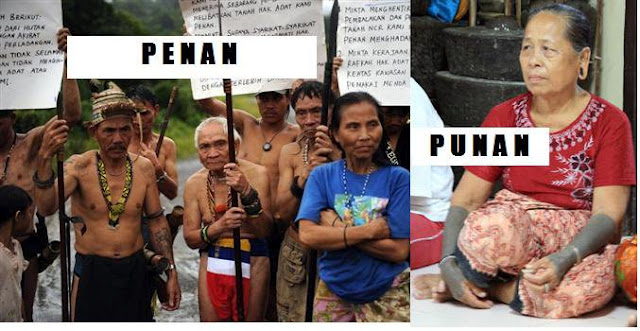 The Penan are a nomadic aboriginal people living in Sarawak and Brunei. They are one of the last such peoples remaining. The Penan are noted for their practice of 'molong' which means never taking more than necessary. Most Penan were nomadic hunter-gatherers until the post-World War II missionaries settled many of the Penan, mainly in the Ulu-Baram district but also in the Limbang district. They eat plants, which are also used as medicines, and animals and use the hides, skin, fur, and other parts for clothing and shelter.

The Penan number around 10,000; only 200 are nomadic. The Penan can be broken down into two loosely related geographical groups known as either Eastern Penan or Western Penan, the Eastern Penan residing around the Miri, Baram, Limbang and Tutoh regions and the Western Penan in and around Belaga district.

They can be considered as a native group or 'tribe' in their own right, with a language distinct from other neighbouring native groups such as the Kenyah, Kayan, Murut or Kelabit. However, in government censuses they are more broadly classified as Orang Ulu which translates as 'Upriver People' and which contains distinct neighbouring groups such as those above. Even more broadly they are included in the term 'Dayak', which includes all of Sarawak's indigenous people.


Penan communities were predominantly nomadic up until the 1950s. The period from 1950-present has seen consistent programmes by the state government and foreign Christian missionaries to settle Penan into longhouse-based villages similar to those of Sarawak's other indigenous groups.[4] Some, typically the younger generations, now cultivate rice and garden vegetables but many rely on their diets of sago (starch from the sago palm), jungle fruits and their prey which usually include wild boar, barking deer, mouse deer but also snakes (especially the Reticulated Python or kermanen), monkeys, birds, frogs, monitor lizards, snails and even insects such as locusts. 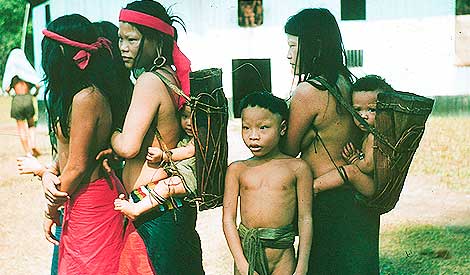 Since they practice 'molong', they pose little strain on the forest: they rely on it and it supplies them with all they need. They are outstanding hunters and catch their prey using a 'lepud' or blowpipe, made from the Bilian Tree (superb timber) and carved out with unbelievable accuracy using a bone drill - the wood is not split, as it is elsewhere, so the bore has to be precise almost to the millimetre, even over a distance of 3 metres. The darts are made from the sago palm and tipped with poisonous latex of a tree found in the forest which can kill a human in a matter of minutes. Everything that is caught is shared as the Penan have a highly tolerant, generous and egalitarian society, so much so that it is said that the nomadic Penan have no word for 'thank you' because help is assumed and therefore doesn't require a 'thank you'. However, 'jian kinin' is typically used in the settled communities. Very few Penan live in Brunei any more, and their way of life is changing due to pressures that encourage them to live in permanent settlements and adopt year-around farming. 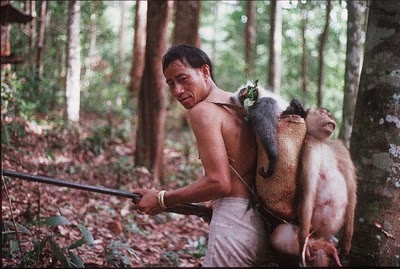 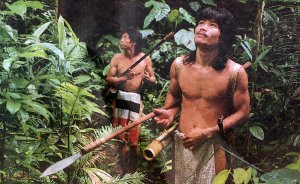 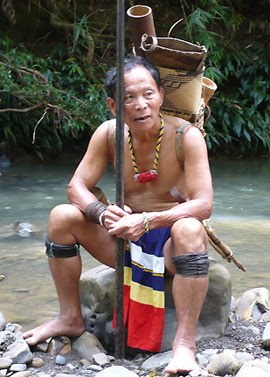 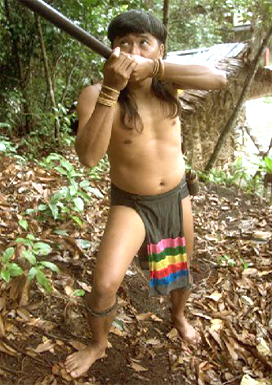 Penan resistance to deforestation in Sarawak


The Penan came to national and international attention when they resisted logging operations in their home territories of the Baram, Limbang, Tutoh and Lawas regions of Sarawak. Since both the settled, semi-nomadic and nomadic Penan communities were and are reliant on forest produce, they were hit hard by the large scale logging operations that encroached on their traditionally inhabited territories.

The logging caused the pollution of their water catchment areas with sediment displacement, the loss of many sago palms that form the staple carbohydrate of Penan diet, scarcity of wild boar, deer and other game, scarcity of fruit trees and plants used for traditional forest medicine, destruction of their burial sites and loss of rattan and other forest products. 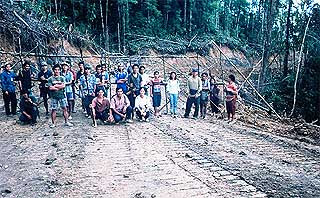 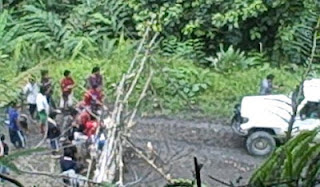 Beginning in the late 1980s and continuing today the Penan and other indigenous communities such as the Iban, Kelabit and Kayan (collectively referred to as Dayak) have set up blockades in an attempt to halt logging operations on their land. These succeeded in many areas but the efforts were hard to sustain and ended in large scale clashes between the indigenous communities and the state backed logging companies, supported by the police and Malaysian army.

The confrontations ended with several deaths, many injuries and large scale arrests of indigenous people. Many of the detained reported being beaten and humiliated while in custody. An independent Sarawakian organisation IDEAL documented such claims in a 2001 fact finding mission entitled "Not Development, but Theft".

Most recently the blockade setup by the Penan community of Long Benali was forcefully dismantled on 4 April 2007 by the Sarawak Forestry Corporation (SFC), with support from a special police force unit and overlooked by Samling Corporation employees. Samling Corporation had been granted a logging concession by the Malaysian Timber Certificate Council (MTCC) that included land traditionally inhabited by the Penan of Long Benali and despite their continued petitions against the concession.

Bruno Manser was an environmental activist and champion of the Penan's plight during their struggle in the 1990s. Named lakei Penan (Penan man) by the Penan, he helped communicate the Penan's cause to the outside world, firstly writing letters to Chief Minister Abdul Taib Mahmud and later leaving Sarawak to educate the outside world (especially timber importing countries in Europe and Japan) about the deforestation and related social problems in Sarawak. He later conducted public awareness stunts such as paragliding onto the lawn of Chief Minister Abdul Taib Mahmud and attempting a hunger strike outside the offices of Japanese shipping companies in Tokyo. 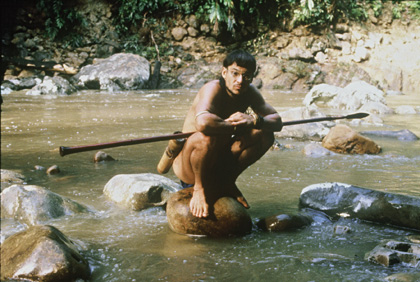 In 2000, Manser went missing when he secretly returned to Sarawak to reunite with a Penan group, his body and belongings have never been found despite intensive searches. Theories of assassination by the Sarawak government or logging companies have sprung up (due to a reputed US$40,000 bounty on his head). Other rumors include those of suicide after years of unsuccessful campaigning or getting lost in the dense mossy forests around Bukit Batu Lawi in the Kelabit Highlands, close to the border with Kalimantan. However, Manser had lived for several years in the region with the nomadic Penan and was thus highly experienced.

The future of the Penan 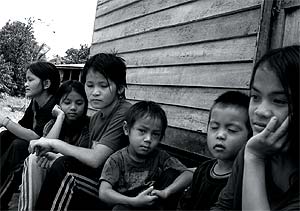 The future of the Penan has been a controversial subject since the confrontation between indigenous rights and state land use began. National and International Non-Governmental Organisations have been pressing for indigenous self-determination and respect for Penan human and land rights in accordance with UN International Labour Organisation Convention N. 169 (1989) that removes “assimilationist” orientated international standards towards indigenous rights, a convention that Malaysia has not adopted.

However, many Malaysian politicians have criticised NGOs for meddling in Malaysian domestic affairs and have accused them of attempting to inhibit development projects and keep the Penan 'undeveloped' and unassimilated into mainstream Malaysian society. Most see the Penan's lifestyle as uncivilised and antiquated (compare White man's burden), an example of this is a regularly recited poem by ex Minister for Environment and Tourism Datuk James Wong

"O Penan - Jungle wanderers of the Tree
What would the future hold for thee?....
Perhaps to us you may appear deprived and poor
But can Civilization offer anything better?....
And yet could Society in good conscience
View your plight with detached indifference
Especially now we are an independent Nation
Yet not lift a helping hand to our fellow brethren?
Instead allow him to subsist in Blowpipes and clothed in Chawats [loincloths]
An anthropological curiosity of Nature and Art?
Alas, ultimately your fate is your own decision
Remain as you are - or cross the Rubicon!"


Many Malaysian organisations have joined the debate such as Sahabat Alam Malaysia (SAM), Borneo Resource Institute (BRIMAS) and Rengah Sarawak. These grassroots organisations have supported indigenous rights and accused the Sarawak state government of repeated neglect of Sarwak's indigenous citizens and exploitation of Sarawak's natural resources. The opposition party Parti Keadilan Rakyat has also taken up the cause of the indigenous people's plight, claiming that they are "living lives of quiet desperation that now and then flares up in action that invites police attention, not to mention the notice of the rest of Malaysians who don't quite know what it is to be under the tyranny of geography."

With the help of such NGOs many Penan communities have mapped their proposed ancestral lands and filed claims in Sarawak's courts in the hope of preventing and deterring illegal logging of their forests. An important precedent was set in 2001 when an Iban village of Rumah Nor won a landmark court victory against Borneo Pulp and Paper and the Sarawak Government for violating their Native Customary Right (NCR) or adat. The victory was recently publicised in a short documentary - Rumah Nor - by the Borneo Project. The verdict is being threatened by a Federal Court appeal by the State Government and Borneo Pulp and Paper. However, 19 Penan communities have now mapped their NCR and four are beginning litigation and in others the logging has more or less stopped in the territory where litigation is pending. Indigenous action has therefore shifted from the human blockades of logging roads to empowerment through the political and legal system and international publicity. 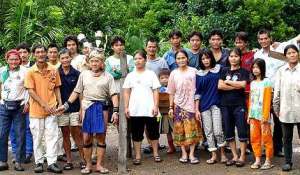 The Penan language belongs to the Malayo-Polynesian branch of the Austronesian language family. It forms an own Group within the Borneo branch of the Borneo-Philippines languages. It may be somewhat related to the Kenyah Languages and might show some evidence of a non Austronesian substrat that might be related to Orang Asli type of language.[15] The Penan language is linguistically interesting since it has six words for varying levels of "we" depending on how extensive the described group in the society is at the same time as having no word to say "thank you" or describe the status of a domestic animal. This provides a good example in discussion of the subject-object problem in philosophy and its relation to language and power. 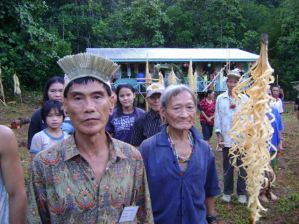 Posted by Hamidah Abuseman at 11:58