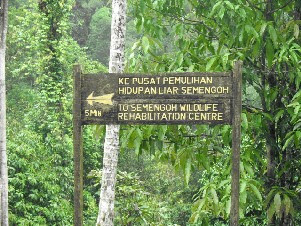 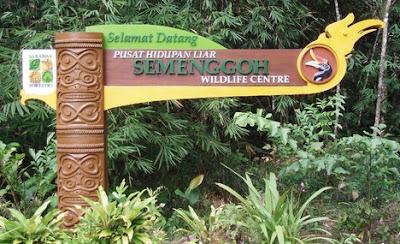 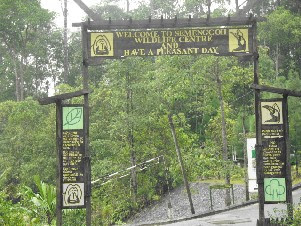 The Semenggoh Wildlife Centre was established in 1975 to care for wild animals which have either been found injured in the forest, orphaned, or were previously kept as illegal pets. The centre is situated within the boundaries of the Semenggoh Nature Reserve, approximately 24 km from Kuching.

When established, the three main aims of the Centre were:

~     To rehabilitate wild animals who have been injured, orphaned in the wild or handicapped by
prolonged captivity, with the objective of subsequently releasing them back to the wild

The Centre has been a resounding success, caring for almost 1,000 endangered mammals, birds and reptiles from dozens of different species. However it is the orang utan rehabilitation programme that has made the Centre famous. In one respect, Semenggoh has been too successful – so many orang utan have been successfully reintroduced into the surrounding forest reserve that the forest’s carrying capacity has been reached, and rehabilitation activities have been transferred to the Matang Wildlife Centre, part of Kubah National Park. 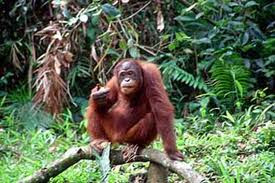 As a result of its success, Semenggoh’s role has changed and it is nowadays a centre for the study of orang utan biology and behaviour, as well as a safe and natural haven for dozens of semi-wild orang utan, graduates of the rehabilitation programme. It is also home to numerous baby orang utan, born in the wild to rehabilitated mothers, a further testament to the success of the programme.

A visit to Semenggoh is a once in a lifetime experience - a chance to see semi-wild orang utan, ranging from tiny infants and boisterous adolescents to dignified mature adults, enjoying life in a secure natural habitat.

ORANG UTAN IN THE WILD 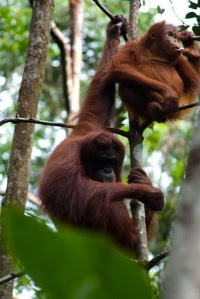 The orang utan (pongo pygmaeus) is found in the rainforests of Malaysian Borneo (Sarawak and Sabah), Indonesian Borneo (Kalimantan) and North Sumatra. It is one of the world’s largest primates, and is almost completely arboreal (tree living). The word “orang” is Malay for “person” whilst “utan” is derived from “hutan” meaning forest. Thus, orang utan literally translates as “person of the forest”. 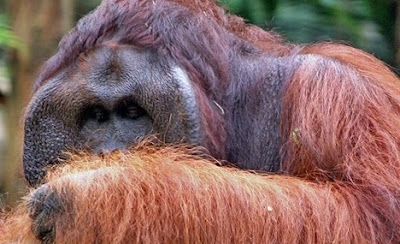 A mature male has large check pads and a pendulous throat sac. Adult males can reach a height of 150 cm (5 ft), weigh up to 100 kg (220lbs) and have an arm span of 240 cm (8 ft). Females are about three quarters of the height and half the weight of the males. Both sexes are covered with long reddish hair.

Orang utan have a low reproductive rate, females usually giving birth to a single infant once every 7-8 years. Females reach sexual maturity at 12 years of age but generally don’t have their first offspring until two or three years later. Males reach sexual maturity at 15 but their cheek pads may not fully develop until a few years later. The life expectancy of orang utan in the wild is unknown but is thought to be less than in captivity, where some have lived to over 50 years of age. 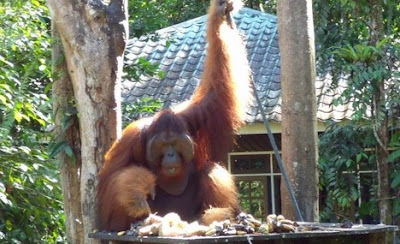 Orang utan are primarily fruit eaters and spend most of the day roaming the forest foraging for food. They are particularly fond of wild figs and the pungent smelling durian. Although fruit is their most important source of food, they also feed on young leaves, insects, bark, flowers, eggs and small lizards. Each individual builds a new nest each night, a safe resting place 12-18 metres (40-60 ft) up in the roof of the forest.

Wild orang utan are generally solitary. However, adolescents often gather in pairs and females occasionally form temporary groups of four or five. This rather lonely existence stems both from the relative scarcity of food in the rainforest and from a lack of predators. A mature adult roams a vast area of forest every day in order to find enough food to satisfy its healthy appetite. Its huge size also eliminates the need for ‘group defence’.

The orang utan is an endangered species and is totally protected by law in Malaysia, Indonesia and internationally. Today, there are an estimated 20-27,000 orang utan left in the wild (perhaps 20,000 or so in Borneo and the rest in Sumatra). Deforestation, human encroachment on their habitat, indiscriminate hunting and the live animal trade: all are factors that have contributed to a decline in their numbers. To gain a better understanding of the orang utan and re-introduce rescued animals into the wild, both the Indonesian and Malaysian authorities have set up rehabilitation programmes. Sarawak’s centre at Semenggoh is open to the public so visitors can find out more about these highly intelligent creatures of the rainforest. 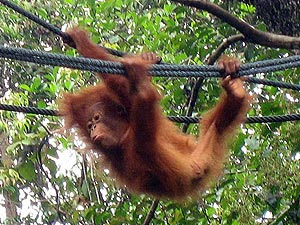 Although the rehabilitation programme for newly rescued orang utan has now been transferred to Matang Wildlife Centre, every adult and adolescent animal at Semenggoh has undergone this programme, so it is worth describing here.

When rescued orang utan arrive at the Centre they are a given a medical check-up and placed in cages. The first stage of the rehabilitation process then begins. Like young humans, the young orang utan have to be taught to survive in their habitat. Every day the wardens take them to suitable places in the forest where they learn how to climb trees, swing on branches and forage for food. After two to four years they are able to fend for themselves and are released into the surrounding Forest Reserve.

Although these recently released orang utan spend most of their time in the surrounding forest, they do return to the centre where they are fed twice daily at a “halfway house” feeding station. Over time the orang utan appear less frequently as they start to adjust to life in the forest. During the fruit season they may not appear at all, which is a good sign and shows that they are adapting well to their new surroundings. The final stage of the long rehabilitation process is for an orang utan to be released into one of Sarawak’s National Parks or Wildlife Sanctuaries. 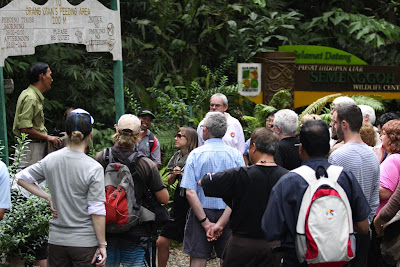 The best time to visit Semenggoh is during the morning and afternoon feeding sessions when there is a good chance of seeing semi-wild orang utan returning to the Centre for a free meal. Feeding takes place between 9.00-10.00am and between 3.00-3.30 pm. 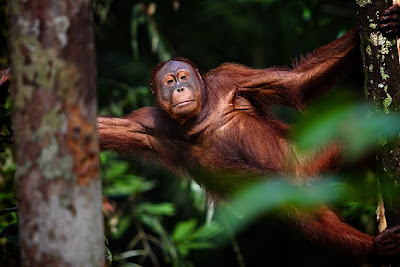 As feeding time approaches, the semi-wild orang utan emerge from the rainforest, descending from the forest canopy to the lower branches of trees near feeding platform. They are highly entertaining creatures and offer a wealth of facial expressions to visitors. 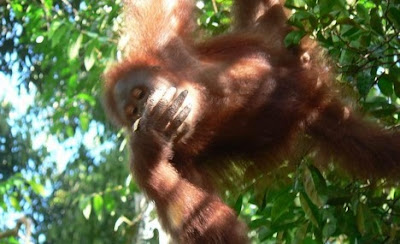 It is not uncommon to see two young orang utan playing, or a mother teaching her baby how to climb, but these antics soon stop when a warden appears carrying buckets of fruits and bottles of milk. Then, the orang utan slowly make their way to the feeding area, faithfully following the footsteps of the warden or swinging in the trees above the footpath. 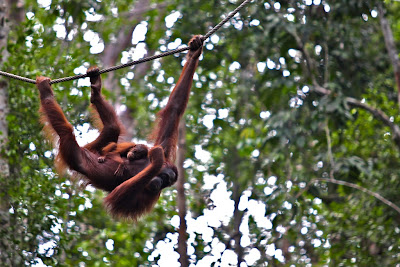 For the visitor, feeding times provide a unique opportunity to view the orang utan at close range. The animals usually spend considerable time feeding in one place, either on the wooden platform, in a nearby tree or hanging from guide ropes. Visitors therefore have an excellent view, a remarkable photo opportunity, and ample time to appreciate the intelligence and beauty of these fascinating forest creatures. 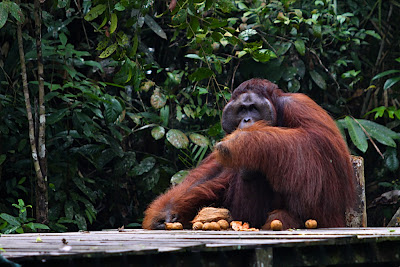 Occasionally orang utan will visit the Centre HQ rather than the feeding area, to simply look at the visitors rather than feed. Whilst it is impossible to assume human motives for this behaviour, it appears they are simply satisfying their curiosity, or in some cases showing off their delightful infants to an admiring audience.

In addition to the orang utan, visitors will be able to see other endangered species at Semenggoh. The centre’s wildlife population varies, so it is difficult to say exactly what animals you may encounter on your visit. However, the centre has housed a wide range of wildlife, including rescued gibbons, porcupines, crocodiles and river terrapins. In the surrounding forest you will certainly hear the cries of rehabilitated gibbons, as well as the songs of a host of wild bird species. Brightly coloured lizards and various species of squirrel are also frequently encountered.

The wildlife rehabilitation centre is part of the Semenggoh Nature Reserve. The other major component of this conversation project is the Botanical Research Centre (BRC). With ethnobotanical gardens, wild fruit orchards, a “Fernarium”, a Rheophyte garden and more, the BRC has much to offer the visitor. Five nature trails and a plankwalk have been laid out to allow visitors the opportunity of seeing the various gardens. The trails are all relatively short with trekking times ranging from 5-30 minutes, whilst the time required for the plankwalk is approximately 30 minutes. A plant identification system has been created alongside the plankwalk so that visitors are able to familiarise themselves with some of the better known trees and plants. For example, Dipterocarps such as Meranti and Engkabang are highlighted, as are wild fruit trees such as Cempedak (jackfruit) and the infamous Durian.

Further details can be obtained at the BRC office.

On occasions, the orang utan may descend from the trees near the Centre HQ and approach visitors. Although this is likely to be an unforgettable experience, visitors should bear in mind that the orang utan, however tame they may appear, are still wild, powerful and potentially dangerous animals. The Centre is also part of a Totally Protected Area. Therefore the following rules & regulations must be observed when visiting the centre. 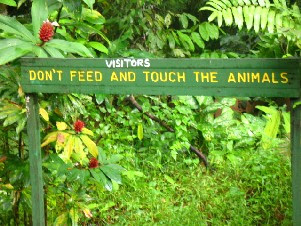 ~  Do not hold, feed, touch, play with or in any way disturb the orang utan, and always move at least six metres away from an animal that is on the ground. There are three very good reasons for this. Firstly, the animals may become too attached to humans, making it harder for them to survive in the wild. Secondly humans are able to communicate certain diseases to orang utan, and vice-versa. By eliminating contact the possibility of disease transfer is reduced. Thirdly, an orang utan may feel threatened and attempt to attack you – some of the Semenggoh wardens carry ugly scars from protecting thoughtless visitors from injury. 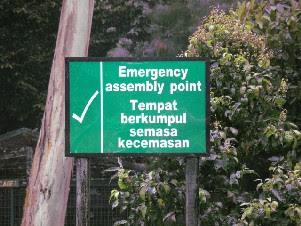 ~  Do not bring any food or drinks into the Centre. The orang utan and other animals at the centre already receive a balanced diet, and the smell of food may encourage an animal to approach too closely.
~  Do not smoke in the feeding area or any other part of the Forest Reserve.
~  Do follow the warden’s instructions and advice at all times.
~  Do not collect, or pick plants or animals in Semenggoh Nature Reserve, or in any other Totally Protected Area.
~  Do not litter. Please use the litter bins provided.

The Visitors Information Centre is located in the Old Courthouse Complex at the junction of Jalan Tun Abang Haji Openg, Jalan Gambier and Main Bazaar, opposite the Kuching Waterfront.

From Kuching, take Sarawak Transport Company bus No. 6 which stops outside the main gate, from here it is a 20 minute walk to the Centre. The last return bus to Kuching is at 1700 hrs. Visitors can also take a taxi from the main taxi stand in Kuching, or from outside their hotel. Local travel Agents also run guided tours to Semenggoh.

There is no accommodation at Semenggoh and overnight visits are not permitted. Visitors must leave via the main gate by 1645 hrs. 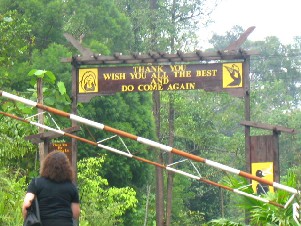 Posted by Hamidah Abuseman at 04:04