Sarawak is known as Bumi Kenyalang ("Land of the Hornbills"). Sarawak is situated on the South-west of the island of Borneo, bordering Sabah to the northeast, Indonesia to the south, and surrounding Brunei.  It is separated from the Malay Peninsula by the South China Sea.

During the 15th century, Sarawak was under the influenced of the Bruneian Empire and was self-governed under Sultan Tengah.

However on the 24th of September 1841 Pangeran Muda Hashim bestowed the title Governor to James Brooke. James Brooke was appointed Rajah by the Sultan of Brunei on 18 August 1842.  The Brooke dynasty ruled Sarawak for a hundred years and became famous as the "White Rajahs". Under British protection, Sarawak was an independent kingdom from 1841 until 1888.

On 22 July 1961 Sarawak was officially granted its independence.  Sarawak joined with Malaya, North Borneo and Singapore, in the federation of Malaysia, which was formed on 16 September 1963.

THE PEOPLE OF SARAWAK

THE MALAYS OF SARAWAK

Despite being Malays, Sarawak Malay has a distinct culture and language to that of other Malays in Peninsular Malaysia. They speak local variant of Bahasa Melayu Sarawak (or Sarawak Malay Language).

As part of the Malay language society, the Malays of Sarawak have their own accent which is different from other Malay accents or the standard national accent.

Sarawak Malay Language (SML) or Bahasa Melayu Sarawak (BMS) here is commonly used by natives in Sarawak. It is quite similar to the Ibanic Languages but is very different from Bahasa Malaysia.

The 'r' are similar to the pronounce of 'r' in the French Language (gurgling type sound).

In fact, most West Malaysian Malays do not understand Sarawak Malay Language or other Sarawakian conversation.

Sabahan dialect is also very different from Sarawak Malay Language. However both Sabahan and Sarawakian used one similar word 'bah'. 'Bah' is used to stress a sentence.

Most of the words used in Sarawak Malay Language (SML) / Bahasa Melayu Sarawak (BMS)nowadays are influenced by many languages such as English and Bahasa Malaysia (BM).

Examples of words that came from English that have been modified according to the local accent : 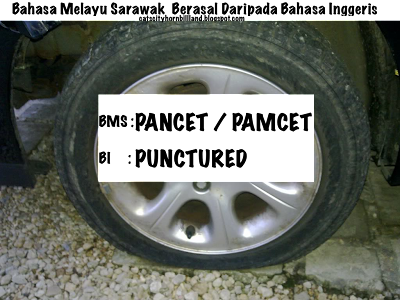 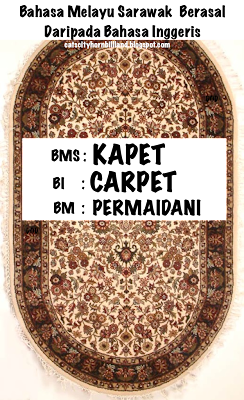 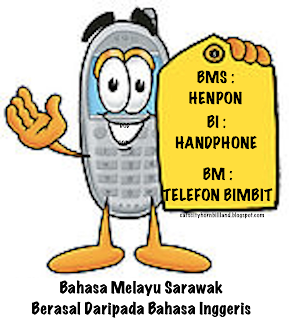 1. Examples of words that came from Bahasa Malaysia (BM) that have been modified according to the local accent. Many of the words are being simplified from the original pronunciation and some are totally different :

Other accent of Sarawak Malay language is known as 'Bahasa Laut', spoken by the Sarawak Malays who mostly settled along the bank of the rivers/sea. Most of the words spoken ended with the vowel "O".

Posted by Hamidah Abuseman at 17:36